Life is storm after storm. The rosary is a great vessel of obedience.

The most common depictions of Our Lady of the Rosary show the Blessed Mother giving her prayer beads to St. Dominic and St. Catherine of Siena hands over. According to tradition, Dominic, the founder of the Dominicans, received the Rosary from Our Lady to support his preaching work in medieval France. Another great Dominican saint of the Middle Ages, St. Catherine of Siena was an advocate of reform and widely known for her piety and devotion.

The battle of Lepanto

But today’s festival has a connection to another Dominican saint. 450 years ago, in 1571, the holy Pope Pius V (a Dominican!) Called the Christian West to pray the rosary. The occasion? The Pope had set up a naval force, the Holy League, to sail against the Ottoman Navy off the Greek coast at Lepanto.

Despite some strategic advantages – including a new type of floating fortress called Galeassen – the Christian fleet was outnumbered and had other significant disadvantages.

Our Lady of Victory

As history tells us, that day the Christian fleet won the battle. St. Pius V had a vision that passed on the success of the Holy League. He attributed the victory to the intercession of Notre Dame after asking Christians everywhere to take up the rosary.

St. Pius then opened today’s feast of Our Lady of the Rosary (once known as “Our Lady of Victory”) to commemorate her protection.

A ship for souls

Today we should think of the rosary as a great ship of the soul. This traditional prayer to Our Lady is a vessel that can carry us through the stormy seas of life.

Catherine of Siena once famously described the order as a ship. Their dialogue tells that Jesus taught them

The rosary is another great vessel of obedience. Faithful prayer of the rosary forms the heart. The examples of Jesus, Mary and other great saints contained in his mysteries show the way of the Christian life.

Faithful prayer of the rosary forms the heart. 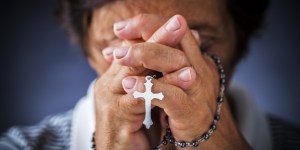