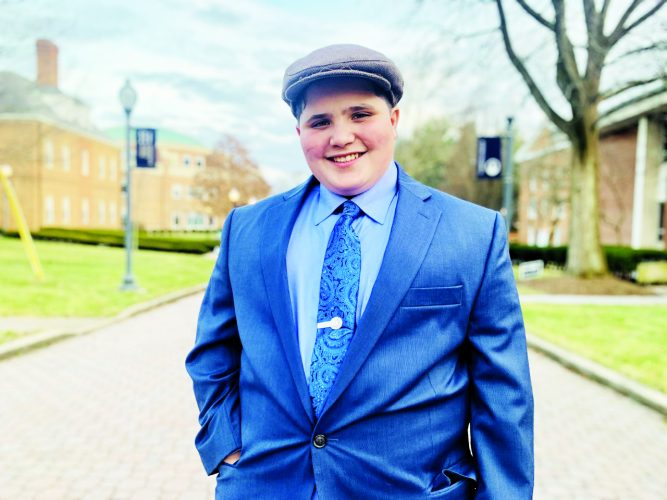 Henry DeVol, 13, was born and raised in Marietta.

(Photo provided) DeVol is shown on a scooter in Memphis, TN.

DeVol became interested in history when his family took a summer trip to the east coast of Washington, DC and Philadelphia.

The Campus Martius Museum in Marietta was built in 1928 on the site of the Ohio Company’s original palisade.

The museum believes that volunteers play a huge role in preserving its history by educating visitors and influencing the minds of youth.

The museum trains an average of 3,000 students annually.

Dan Hedges, the museum’s program coordinator, works with the volunteers.

One day DeVol was walking and said: “What can I do?” Hedges said.

DeVol was keen to volunteer and thought he would go to the museum to see if there was any way he could help.

“One day I was riding my bike thinking I would ask for it (voluntarily)” said DeVol.

(Photo provided) DeVol is holding a design he drew for a Greek vase at school.

Hedges said DeVol was really smart, had an interest in mythology and ancient coins, and had a great sense of humor.

“He is a very old soul person” said hedges.

One of the options available to volunteers at the museum is to take a tour of the Rufus Putnam House. It’s the oldest house in Ohio.

The only requirement for volunteering is to be enthusiastic. DeVol said he loves being a volunteer tour guide and thinks it is fun.

“I can teach people things that I love, I meet new people and I can serve my community.” said DeVol.

DeVol was also able to help with the summer camp at the museum. DeVol said he was able to help the other children learn about history and practice new skills and traits.

DeVol is part of a close family. His family consists of him, his two parents, his older brother and their dog.

“I read all kinds of books, mostly history books” he said.

He also enjoys learning about ancient history and collecting ancient Roman artifacts. DeVol is interested in Formula 1 racing, pottery and is also a bagpiper of the traditional Scottish musical instrument.

DeVol’s family is proud of the young man he will become.

“We are just proud of him and that he wants to help the community.” said Stacy DeVol, Henry’s mother.

Troy DeVol, Henry’s father, said it was great to see his son grow into his own person.

“He is proud to be himself” said Troy DeVol.

James Dobbs can be reached at jdobbs@newsandsentinel.com

To find out more about how to volunteer at the Campus Martius Museum, visit mariettamuseums.org/volunteer/

Latest news and more in your inbox