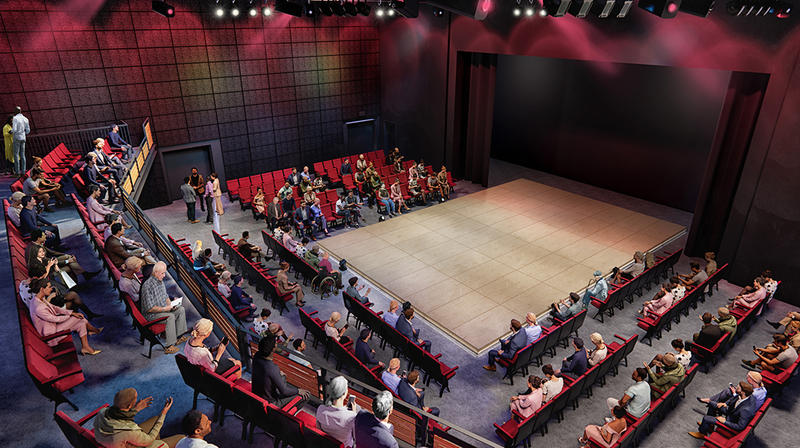 This week’s Art and Soul is all about the local performance art scene. Lisa Barry speaks to Jenn McKee, a local freelance journalist specializing in the arts and culture.

Jenn describes the upcoming in-person theater performances planned for the coming months after being mostly online during the pandemic.

Listen to the full interview.

Paul Keller’s House Calls program can be seen again on Sunday evening in the KCH, this time live and in person in the Lot Lounge!

Paul brings with him the legendary Detroit music couple Ursula Walker and Buddy Budson, who have had an eventful career in the Detroit music scene. With a collaborative performing career spanning 130 years, the couple were the Legacy Artists at the 2020 Detroit Jazz Festival. Ursula was a star actress in early Detroit television, radio, commercials, and USO shows. She is a veteran of the Detroit jazz club, concert halls, and festival scene. Buddy toured the world with the likes of Buddy Rich, Earl Klugh and the Four Tops. Together they have been two of the most famous figures in the Detroit jazz community for almost 50 years. In addition to standards and jazz repertoire, they often play original texts on well-known jazz instrumentals.

This legendary group of guests from Detroit is rounded off by the extraordinary percussionist David Taylor.

* The Lot Lounge is an outdoor venue in our rear parking lot. Seating begins 30 minutes before the start of the performance. A bar with a barber and wine is available for the 21+.

Lisa Barry: You’re listening to Eighty Nine One WEMU, and that’s Art and Soul. This is Lisa Barry. This week’s Art and Soul is about performance art that is slowly coming back to life after more than a year in a pandemic. In order to know exactly what to expect, a local freelance journalist who specializes in art and culture joins us. And you’ve heard it before here at Art and Soul. Welcome back Jenn McKee. Nice to talk to you.

Jenn McKee: Hello. You are also great to talk to.

Lisa Barry: You were busy gathering information about upcoming theater performances. So where do you want to start?

Jenn McKee: Well, one of the biggest novelties in this area is Dexter’s Encore Theater. They have just moved to a new room – a bigger room – and have been focusing all of their efforts on this during the pandemic as they were unable to put on shows during this process, which in some ways, allowed them to focus their attention on this project, that’s pretty big. But I think they are really excited to have a season ahead and invite people to this new space to see shows.

Lisa Barry: And when can we go there and see them?

Jenn McKee: You know, they haven’t released an official date yet. And I think they have a season announcement coming up. I have a little taste of what they’ll be offering this year. I’m really excited to see what they’ll wear. I’m going to mention one thing that is really exciting to me. One thing that seems to be in the pipeline is a show called A Thousand Faces, which will focus on the story of Lon Chaney who was a silent movie star. And there are often deaf actors and actresses the opportunity to appear in the area of ​​this show. So I’m very happy about it. And I imagine that they’ll probably present that in the spring.

Jenn McKee: Well, Theater Nova just recently released a line-up for the entire season – the indoor season. They even require that people who come to shows there in the yellow barn get vaccinated or, if they are not vaccinated, wear a mask. So these are things they set up to make the actors and audiences feel safe when they return in person. The first show of their season, which airs on September 17th, is called The Lifespan of a Fact by Jeremy Kareken and David Murrell. And honestly, there are a couple of things about the season lineup that really interest me, but that’s one that attracts me especially just because the story is probably about an intern at a high profile magazine fact-checking essay from a famous one Writer, and things get complicated from then on, which naturally sounds to me like, “Oh, I want to see that.”

Lisa Barry: Kind of like your life right now.

Jenn McKee: Yeah. And also because the time will soon come – it’s September 17th – it may be the first chance to sit in the theater and really see a show in person again. So, I just feel like when the lights go out, I’ll just sob softly. And I think I missed it so much.

Lisa Barry: Yes, yes. So we are grateful that you share this information about what we can look forward to. And Penny Seats Theater is working on something?

Jenn McKee: They are. And the Penny Seats started out as a theater company that did a lot of outdoor theater. Indeed, their first show they have planned, Summer of Love, is an outdoor presentation. But one that I’m really excited about and that they announced is called A Ripper by Jacob Marx Rice. And that from October 14th to 30th in the Stone Chalet, an unconventional theater space in the area. But that wasn’t, you know, it wasn’t necessarily built to put on theatrical productions, but that they made that their home. And in a way, it’s a really great place, especially for a spooky Halloween show like this one about a reporter investigating Jack the Ripper and facing this killer. And that mixes in with this kind of cat-and-mouse game. So, that just sounds like perfect season fun to look forward to.

Lisa Barry: And that will be in the Stone Chalet. This is a theater hall. Where is that?

Jenn McKee: Like I said, it was kind of an inn in Ann Arbor I think. And, but this kind of uses this space in this inn to put on shows. Well, as I said, Penny Seats has been adapting it over the past year or two as one of the places they have put on some of their shows.

Lisa Barry: We look forward to personal appearances and speak to Jenn McKee here at Art and Soul. And the Ann Arbor Civic Theater has something coming up. But it won’t take a while, will it?

Jenn McKee: No. Yes, this is from January 13th to 16th. I only highlighted this because it’s such an interesting, unique piece. It’s called The Curious Incident of the Dog in the Nighttime. And it was a Mark Haddon bestseller many years ago. But so it’s about a young man who feels it’s never explicitly said, but it seems like he’s on the spectrum. Maybe he has Asperger’s. He is a math connoisseur. But there is one dog that appears to have been forcibly killed. And so it is this young man who is trying to fit himself together without the tools, reading people very well, or having problems with others to solve this puzzle for himself. So it’s kind of a coming-of-age story that is just a remarkable piece. So I think it’s a good opportunity for people to check that out.

Lisa Barry: And the always popular Purple Rose Theater in Chelsea. Do you have something in front of you personally?

Jenn McKee: Yeah. They just announced – they haven’t released the season – but they have announced that they will have a world premiere, which is their calling card, so to speak. That’s what they do to showcase first-time performance of new pieces. And this is called Under Ceege by Jeffrey Chastang. It is headed by Lynch Travis and opens January 20th. They didn’t give a lot of details about whether they needed a vaccination or if it was half capacity. They haven’t really announced that yet. But again, since it’s January, they’re kind of waiting to see what the environment looks like at that time.

Jenn McKee: Yeah. Yeah, I think the cinemas have been careful, but they’re all so excited to come back to it. And I know that people who love to see theater are just as excited to go back there.

Lisa Barry: I want to plug in, because there is a music performance this Sunday. Paul Keller, WEMU favorite, will be making house calls at the Kerrytown Concert House in Ann Arbor. And on Sunday, July 25th, it’s Paul and the legendary Detroit music couple, singer Ursula Walker and pianist Buddy Budson, and also the extraordinary percussionist David Taylor. And that’s that Sunday at the Kerrytown Concert House in Ann Arbor, July 25th at 6:30. I know this is music, and I know Jenn was kind enough to talk to us about the upcoming theater, and I just wanted to pull the plug. But what’s the first thing we can see in person?

Jenn McKee: It might actually be the Theater Nova show. The lifetime of a fact on September 17th. This is the earliest offer I’ve seen so far. So, you know, look at lists and keep your ear to the floor to hear more. But right now it looks like the first way to sit in a theater and turn off the lights for a moment.

Lisa Barry: And Jenn, we appreciated that you wrote here and there during the pandemic. Hour magazine is coming. We will also look for your byline in your work there. And thank you again for talking to us here at 89-1 WEMU as part of Art and Soul.

** Special thanks to Paul Keller for providing the Art & Soul theme music. **

Non-commercial, fact-based reporting is made possible by your financial support. Make your donation to WEMU today to help your NPR station flourish in your community.

– Lisa Barry is the host of All Things Considered on WEMU. You can contact Lisa at 734.487.3363, on Twitter @LisaWEMU, or by email at lbarryma@emich.edu