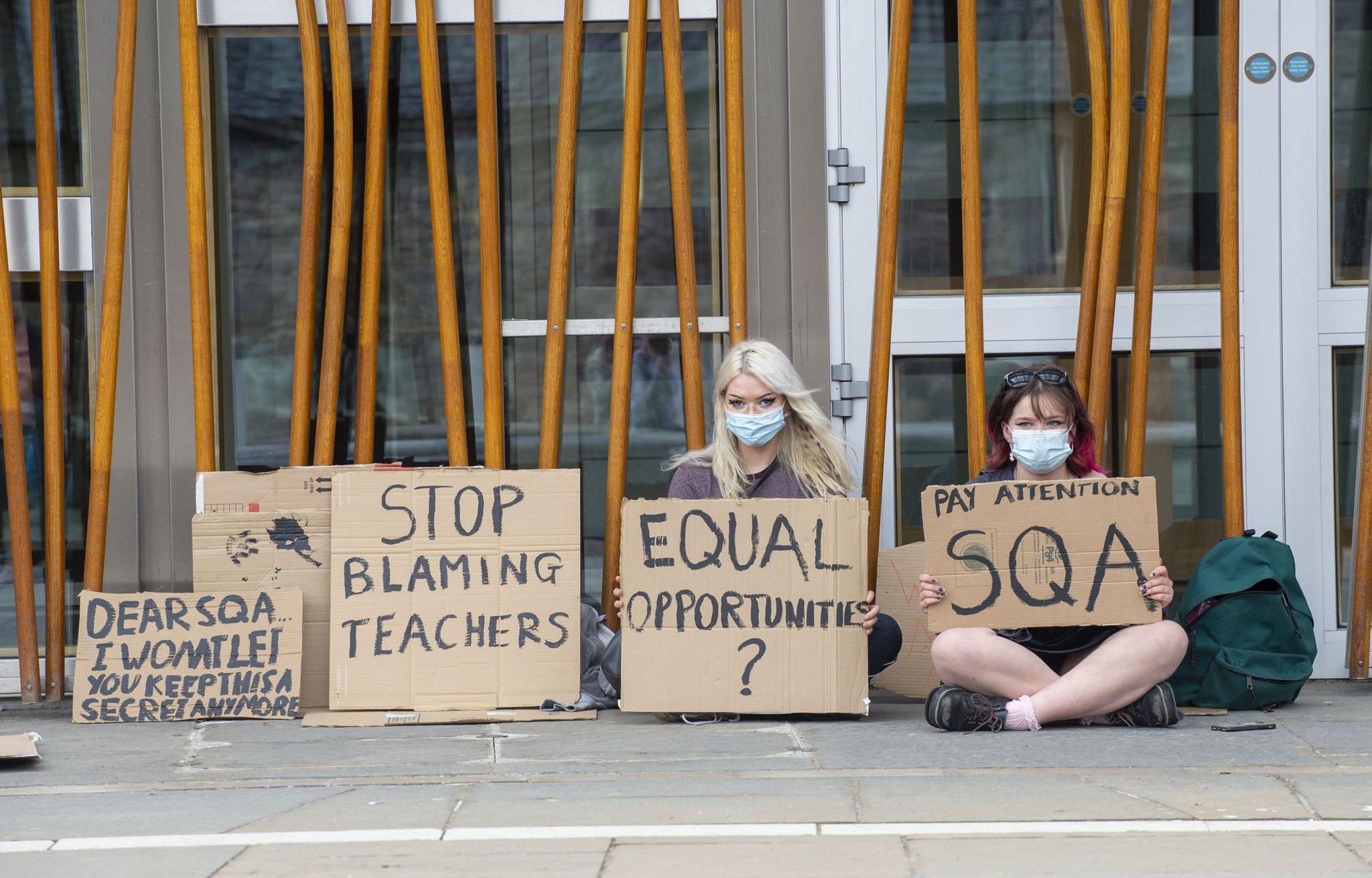 Students are protesting in front of the Scottish Parliament earlier this month about problems with this year’s exams. Image: Lisa Ferguson.

High school and college students took to the streets to protest how the SQA had “tempered” their grades – leaving 125,000 with worse results than their teachers had predicted after the formal exams were canceled.

That was the turmoil, which is less common in Scottish politics than the sight of chicken teeth: the First Minister admitted a mistake and the original results have been rightly restored.

How much soul searching is going on this year, I wonder? At the time of this writing, it’s fair to say none.

How much louder and angrier do students (and parents and teachers) have to be to get a similar result from Nicola Sturgeon and her new Education Secretary Shirley-Anne Somerville this year? Prepare your hearing protection.

Because the confusion of this year’s exam diet will certainly have its price – and let’s assume that the fourth through sixth grade students sat like this, even if they did so in classrooms instead of in auditoriums. But the price shouldn’t be a potentially diminished future for the children hit by another institutional mess.

The world is not fair, many adults will cry dismissively. Children have to get used to this early on. Anyone with teenagers knows that they are already too aware of this – nowhere are the differences in the life situation of families more evident than on the playground of a state secondary school.

And Covid, as we are repeatedly told, has exacerbated all inequalities in society. The idea that this has no impact on the education of children who are already in poverty, struggling in chaotic households, with additional special needs, with caring responsibilities, or are self-caring is for the birds.

However, instead of holding on to the promise that performance over the severely disrupted year would be based on teacher ratings, students were forced to sink-or-swim ratings. And now, as The Scotsman revealed yesterday, students are being told to be pulled from ratings after failing and as if they never existed to keep school stats healthy.

Discussions about withdrawing from exams usually take place after the preliminary exam if the child has failed. For many, especially teenage boys, such a move spurs them on to pass the final exam. This year, however, there were no preliminary rounds, so the children don’t get a second chance.

It is hard to believe that a government that waits to make Scotland the best place to grow up is putting its older schoolchildren to the test in this way.

Nicola Sturgeon promised the children in care last year that she would fix a care system that was “broken, bureaucratic, callous, stigmatized and entangled in impersonal language”. Exactly the same words could be used by the SQA and their own government. Will they search their soul too and find space to fix that too?

A message from the editor: Thank you for reading this article. We need your support more than ever as the changes in consumer habits caused by the coronavirus are affecting our advertisers.

If you haven’t already, support our trusted, fact-checked journalism by purchasing a digital subscription.