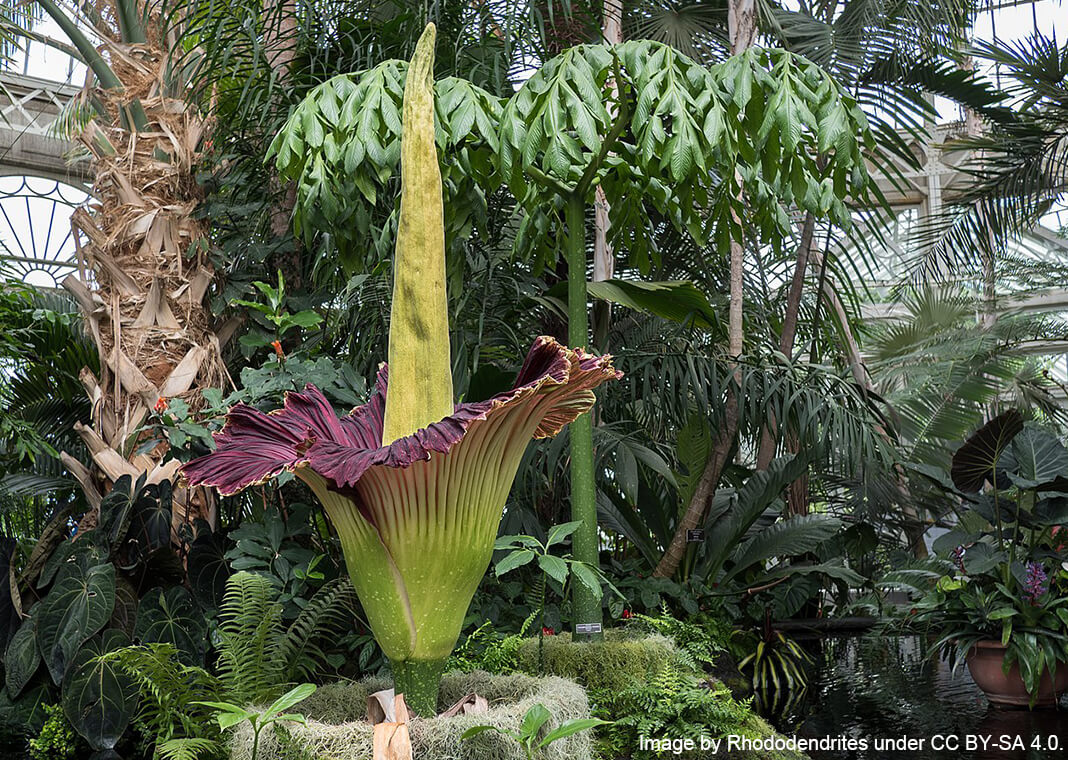 The corpse flower only blooms once every three to ten years. It’s very rare. Well, actually, the plant itself is not rare, just the flower. That’s the part people are waiting in line for. It takes a lot of patience to wait for this particular plant to flower. Once it does, not blinking to avoid it is an experience. When the nose is open, however, one realizes that the corpse flower has finally bloomed. Apparently it stinks of rotting meat.

I first found out about the corpse flower waiting in the car pool line at my eldest son’s school. It was just the two of us in the car, and he had begged me to search the internet for rare plants and animals every morning for two weeks while we waited. He kept asking me to look up something he had just learned from some online video. It was always something rare and unusual – and often quite creepy or smelly! Occasionally I would interfere, “Hey boy, what if I’m just looking for roly polies today?” or “Would you like to learn more about turtles?”

But he always replied with the same question: “But, mom, are they rare?”

My eldest son was never interested in everyday life. He focuses his energy on what is rare. However, what always strikes me are the rare things he focuses on. It is not the rare plants, animals, or people that are celebrated for their fascinating beauty or brilliant talents. Instead, these rare parts of creation are the most misunderstood. His search never begins with “most beautiful” or “most perfect” or “most dazzling”. Instead, he looks for “corpse flower” or “ugliest fish in the world”. (The blobfish gets this prize, by the way.) He looks exclusively for the outsiders, the eccentrics and the outcasts and celebrates them for exactly what has sent them into exile.

In many ways, I believe that he understands the gospel message better at the age of eight than I did at 40. As I immerse myself more in the gospels as I work with the retreat, I become more aware of the number of times Jesus sought it out what society looks at are the outsiders, the eccentrics and the outcasts of his time. Jesus never considered whether the people he met were worthy before speaking to them, healing them, forgiving them, or eating with them. He never wondered if they were worth it before he loved them. He celebrated what is unique in every human being, because he knew the immense love that went into creating every human being as he is.

So what’s stopping us from doing the same?

I will start my 20th year of apprenticeship later this month. I hope this year I can delve more into the rare treasures this world has to offer both inside and outside the classroom. May we all remember, through the example of my Son and the gospel, that all are worthy and all are loved, including ourselves.

Image by Rhododendrite under CC BY-SA 4.0.