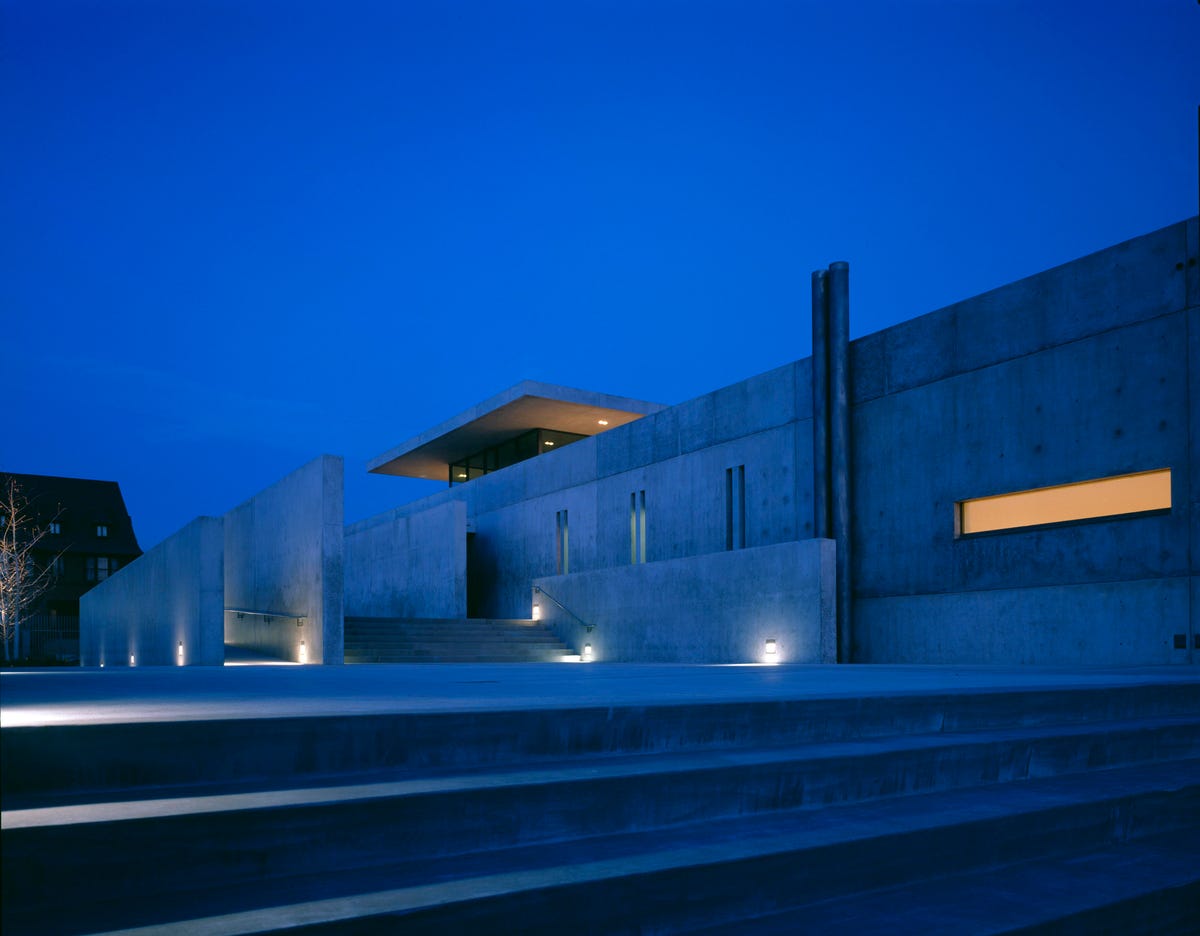 St. Louis surprised. No more than at the Pulitzer Arts Foundation, where the intrigues begin before entering the edgy, modern concrete masterpiece by legendary Japanese architect Tadao Ando that houses it.

The Pulitzer campus is located in the Grand Center Arts District and includes the museum, park-like garden – a fascinating reclaimed lawn full of native plants – a grove of trees behind the museum – framed from the inside by a central water courtyard – and the upcoming Spring Church, an adjoining one , over 100 years old stone bowl of a church that was burned by an electric fire in 2001 and will open this autumn as an installation room for works of art.

An exhibition from now until October 31 will connect these areas for the first time. “Chloë Bass: Wayfinding” features more than 20 site-specific sculptures installed in the Pulitzer’s exterior and adjacent areas. Each of these places or “chapters” is anchored by a billboard with a question from the artist, taking into account an aspect of human existence such as family intimacy, longing, fear and loss.

Accompanying sculptures contain associated texts and images that stimulate private reflection and intensify everyday moments. Through these meditations, the work engages the viewer in an exploration of visual and written language. In addition to the sculptures, the project includes a site-specific audio work of art that deals with ideas of place, belonging, joy and risk.

“We have been running some of these public projects in our neighborhood on a regular basis for the past decade, and the more we’ve done these temporary projects, the more we have come to realize that we are real administrators of the neighborhood and, as land owners, we have to do something make more aware … and in the longer term with a view to the community, ”Kristin Fleischmann, who organized the installation of Chloe Bass, told Forbes.com.

In recent years, a landscape architect has been hired to gradually transform Park-Like into one of the city’s most unusual public parks, a natural space for people and wildlife – walking paths that place neighbors among the birds and pollinators of the area.

“The ‘Wayfinding’ exhibition is the first time we’ve installed public art on the site and it actually feels like it is now fully alive,” said Fleischmann.

“We try to think about art and architecture that extends to both the built and natural environment; We’re trying to think about how we can use this to bring people together, ”Tamara Schenkenberg, one of Fleischmann’s colleagues at Pulitzer, told Forbes.com. “As the years go by – we’re turning 20 – we think more ambitiously about the inside and the outside of the building; It’s an exciting moment when we’re expanding and thinking broader. “

Schenkenberg curated the attraction “Hannah Wilke: Art for Life’s Sake” presented in the museum, the first major exhibition of Wilkes (1940-1993) groundbreaking work in over a decade. As one of the leading American artists of the 1960s, Wilke developed an unabashed, cross-border art practice that included photography, video, and works on paper, as well as sculptures made from clay, latex, chewing gum, and other non-traditional materials.

“Materially diverse and formally experimental” describes Schenkenberg Wilke’s work, which is emphasized by its characteristic feminist iconography – the abstract vaginal shape in clay. For Wilke, this was a means of strengthening her body and validating the women’s experiences.

“Art for Life’s Sake” would attract attention in New York or Los Angeles. Wilke is an artist who can still be considered innovative three decades after her death. Wayfinding was originally commissioned by the Studio Museum in Harlem to highlight a black artist who is not yet 40 years old. The Pulitzer’s amazing building doesn’t look like what you’d expect from Budweiser’s house.

“The Midwest is often marginalized, and we have this split thinking that art and culture only thrive on the coasts,” said Schenkenberg. “The Wilke Show clearly contradicts this binary thinking. We were really looking forward to the presentation (this exhibition) and judging by the reaction of our audience, I think there is (in St. Louis) a great appetite and interest in feminist topics and in discussions about gender. “

“Art for Life’s Sake” closes with Wilke’s impressive intra-Venus photo series (1991–1992), in which she reveals the changes in her body as a result of cancer treatments. Non-Hodgkin’s lymphoma would claim her life.

“What I see in her practice is the desire to affirm life. You see it from the very early work in the 1960s to the last work she accepted after her (cancer) diagnosis, ”said Schenkenberg. “(Intra Venus) is very provocative – which is another aspect of her work – but it’s also life affirming and she documents these changes in her body with honesty, humor and vulnerability, and I think it’s this mix of the vitality of her body and the vulnerability of her body, which is really pervasive and testifies to the power of her images. “

Intra Venus is the rare, raw artistic creation that universally touches the audience regardless of their familiarity with “fine art”.

“It really normalizes elements of our body that change over time. Women, we grow up with a certain way our bodies should look and be and we don’t talk about disease and we don’t talk about death in American culture and normalize it as much as it should be, ” adds Fleischmann. “So many women go through this and there can be a lot of shame – or hiding – and I think Wilke’s fearless honesty – there’s a lot of beauty and power in it – so it’s very emotionally challenging to experience, but at the same time,” time is it is very life-affirming and powerful and beautiful. “

Since opening 20 years ago, the always-free Pulitzer has revitalized its home, bringing new energy and interest to an area that, like many in St. Louis, has seen its better days after the city’s top mid-population 20. Similar impacts across St. Louis are the city’s black-run businesses, another surprise to discover.

The Gourmet Soul Restaurant reinvents traditional soul food, while the Turn does the unimaginable and offers “health-centric American comfort food”. Turn’s Sunday Slow Jams Brunch is a delicious combination of chef and owner David Kirkland’s love for food and music. The former DJ’s biscuit flight with four different biscuits and seasonal house made jam demands a visit. As a treat, Pharaohs Donuts serves old-school classics, while La Patisserie Chouquette treats you to luscious cakes and macarons. At Prime 55, Orlando Watson and Tony Davis, co-owners and childhood friends, offer an urban infusion of the classic gourmet restaurant with steaks and seafood with a dash of Creole.

Jewelry from the Diversity Gallery or a title from the African-American children’s bookstore EyeSeeMe are the perfect gift or souvenir. For a weekend visit or extended vacation, the Central West End Bed and Breakfast puts you just minutes from the city’s top attractions.