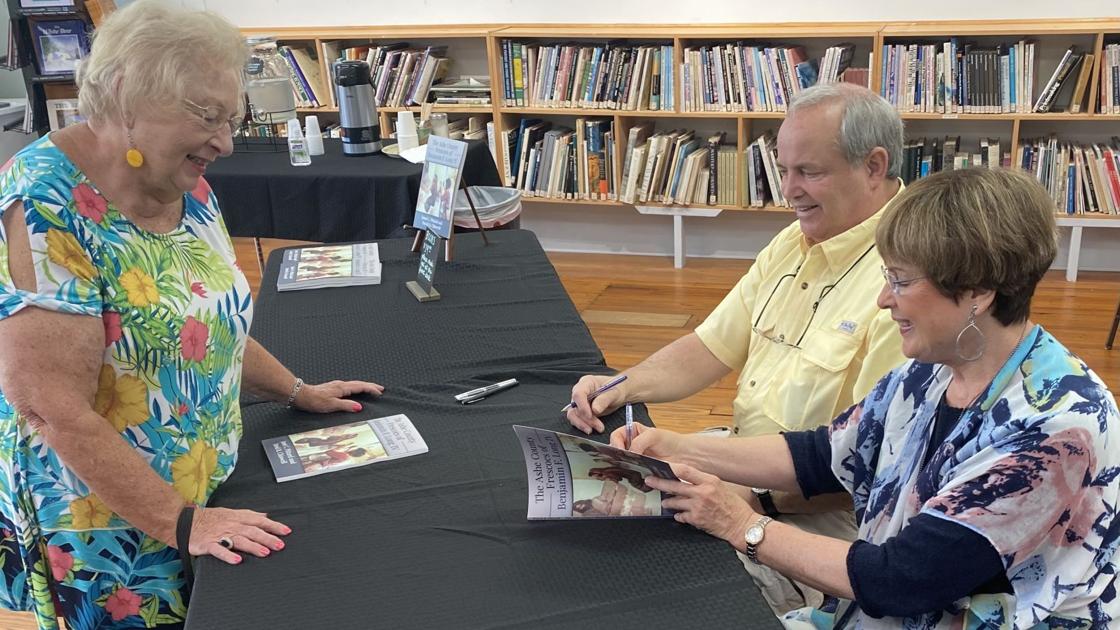 WEST JEFFERSON – Ashe County’s frescoes by artist Benjamin F. Long IV are as exciting to residents and visitors today as they were when they were first completed in the 1970s and 1980s. Now, a new book by Janet C. Pittard and David B. Chiswell offers readers a full and comprehensive insight into the arts and crafts, the craft and the craftsmen of these enduring works.

Commissioned by the Ashe County Frescoes Foundation – the organization charged with protecting and preserving the frescoes of St. Mary’s Episcopal Church in West Jefferson and the Holy Trinity Episcopal Church in Glendale Springs – “The Ashe County Frescoes of Benjamin F. Long IV ”(McFarland & Company), includes in-depth interviews with the artist and primary source research from models, assistants, volunteers, and observers of these early projects.

On July 10th, Pittard and Chiswell were invited to an autograph session at the Florence Thomas Art School in West Jefferson. The following is a review of the book by Ashe Post & Times:

Translating works of art into print is a challenge, a test that becomes even more insurmountable when that art is the masterful frescoes from Ashe County, NC, and this print is a book that seeks to trace the historical development of four found To describe and display masterpieces in two small churches.

But Janet C. Pittard did the job by working here with co-author David B. Chiswell on a thin but richly detailed, full-color work that takes the reader beyond what the eye can see.

Thoroughly researched and competently indexed, “The Ashe County Frescoes of Benjamin F. Long IV” reads like a luxurious travel fairy tale. If you come to the introduction, “The story of the Ashe County’s frescoes by Ben Long begins with the arrival of Episcopal Church in Ashe County in the mid-19th century,” you know you’ve settled into a comfortable story that is almost as old as the ones your grandfather told me on a long time ago summer night with fireflies squinting straight from the porch.

It is not surprising that the narrative is well researched. Chiswell spent three decades filing for the North Carolina Department of Natural and Cultural Resources.

The story is expected to be compelling. In addition to serving with the North Carolina governor’s office for 30 years, Pittard has authored two books and more than 100 articles for Our State Magazine.

But taken together, there is no writer couple better prepared or more inspired to tell the story of a then-young artist who would gain international recognition and the works they would bestow on a rural county in western North Carolina.

The fact that both Pittard and Chiswell West Jefferson call home gives the work not only legitimacy and authenticity, they also write with the ears of those who live in these mountains. Going from history to technique, the authors take us on an explanatory and pictorial journey through the parish of Holy Communion – the two Episcopal churches in Ashe County, St. Mary’s in West Jefferson and Holy Trinity in Glendale Springs that house the frescoes us in the first bank for a bird’s eye view.

As nicely as the photos are reproduced in the book, it is likely that anyone who has the skills will want to see the frescoes for themselves after reading it for the first time. To this end, Pittard and Chiswell donated the book’s copyright and royalties to the Ashe County Frescoes Foundation, the organization that works to protect and preserve the artwork.

For Ashe County’s residents and the thousands who flock to the frescoes each year, the gifts keep coming.

Copyright © 2020 by Mountain Times Publications. The digital or printed distribution of this content without prior written consent violates federal law and can be legally prosecuted.