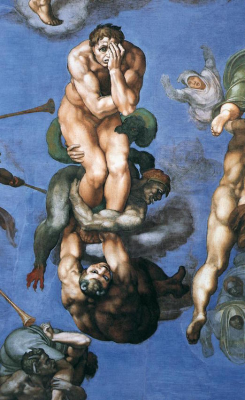 Jesus instructed the twelve as follows: “The disciple is not superior to his teacher, nor is the slave to his master. It is enough for the student that he becomes like his teacher and the slave like his master. If you have called the master of the house Beelzebul, what will you not say about his house?

“Do not be afraid of those who kill the body but cannot kill the soul; rather fear him who can destroy body and soul in hell. Can’t you buy two sparrows for a dime? And yet nobody falls to the ground without your father knowing. Every hair on your head has been counted. So you don’t need to be afraid; you are worth more than hundreds of sparrows.

“So if someone declares myself for me before people, I will declare myself for them before my Heavenly Father. But whoever denies me before men, I deny him before my Father in heaven. ‘

Reflection on the fresco

Our work of art today is a detail of the Last Judgment by Michelangelo in the Sistine Chapel. It shows a group of the damned being dragged to hell. It is inspired by Dante’s Inferno, which Michelangelo would have been very familiar with. The judgment on these figures frightened them, strongly represented here in our figure, which seems to be in complete inner agony. It expresses remorse, fear, despair and fear of what might happen to him now.

Jesus tells his disciples not to react with undue fear to the persecution they will face. He points out that those who have authority can only kill the bodies, but not their souls or spirits. While it would be easy for us to believe that this reading was intended for first-century Christians in the face of cruel persecution, it is also a reading that applies to us today. Jesus urges us to have a healthy “fear of the Lord” as described in the Old Testament. This fear is not an invitation to panic or fear God. No, the fear Jesus describes expresses a deep respect for God. It is a fear that is rooted in love while recognizing that God has the ultimate power to do what He wants, such as sending people into the inferno, as depicted in Michelangelo’s fresco.

In the past, committed Christians were known as “godly people”. It was supposed to be a compliment. Perhaps we’ve swung too far the other way now, where “fear God” is just seen as an old-fashioned concept? Another view is that when we fear God we know that there is nothing or no one left to fear …

We need your support

ICN aims to provide quick and accurate coverage of all topics of interest to Catholics and the wider Christian community. As our audience grows, so do our costs. We need your help to continue this work.

Please support our journalism by donating to ICN today.