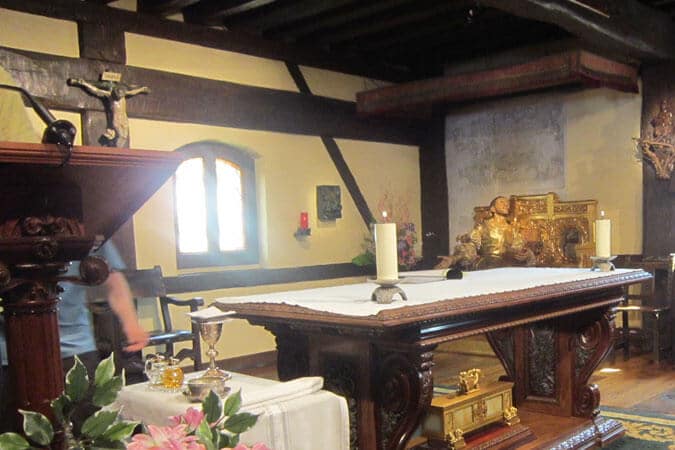 The room inside the original castle / house where Ignatius recovered from his wounds and where he experienced a change of mind and direction. Today this room is a chapel.

Editor’s note: Throughout July we are celebrating 31 days with St. Ignatius, a month-long celebration of Ignatian spirituality. In addition to the calendar of Ignatian articles found here, this month’s posts on dotMagis will explore cannonball moments – moments that changed the course of a life, like a cannonball hit the course of the life of St. Ignatius Loyola has changed. The inspiration for our theme is the Ignatian Year, which marks the 500th anniversary of Ignatius’ injury and conversion.

The year is 2001. I was part of a group of about 25 people who had made pilgrimages to Ignatian sites in Spain. It was mid-October, about a month after the September 11th terrorist attacks. I worked as an editor at Loyola Press for a number of years and was happy to get to know Ignatius first hand. I was interested in Ignatian spirituality, but to be honest, I wasn’t particularly passionate about it.

The pilgrimage began in Loyola, the small town where Ignatius grew up. His home, a small, squat castle, is still there. So was the room he was taken to in 1521 to recover after a cannonball smashed his legs during a battle in Pamplona. Our group celebrated mass in this room, which is now a chapel. During the Mass I heard a soft voice say, “Something important began in this room a long time ago. I want you to be part of it. “

That scared me. I am not someone who hears voices in prayer. I thought about it. I wondered if I should do something about it. I did not think. After all, I worked for Loyola Press. I was already part of something that started in this room.

The voice I heard in Loyola did not speak of being a good clerk in an Ignatian ministry. The Lord wanted me to be transformed by the Ignatian spirit. I had the common sense to open up to it, and it actually happened.

Follow along with 31 Days with St. Ignatius reading Trust in Poor Jesus from Ronald Modras.

Use the hashtag # 31Days with Ignatius on your favorite social media and share your cannonball moments.