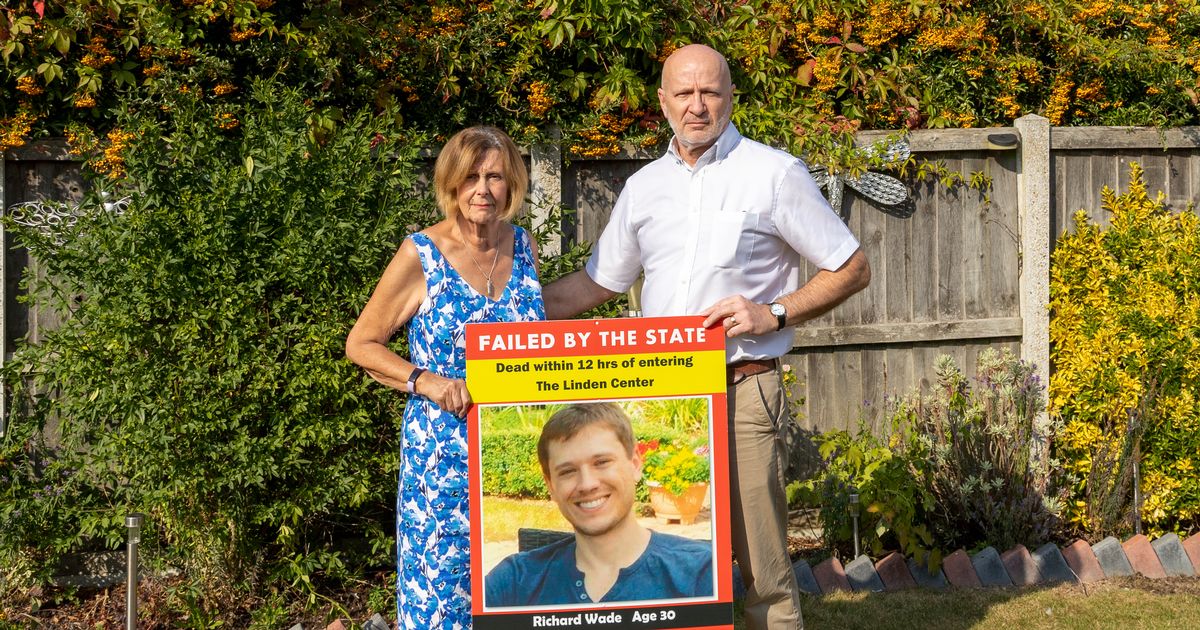 One father has said that every time he lives through his son’s death, part of his soul dies as the mistakes that have contributed to himself and 10 other people have been exposed.

The Essex Partnership University Trust (EPUT) has been fined for repeatedly failing to minimize the risks that resulted in the deaths of 11 at-risk mental health patients.

A number of relatives and friends, speaking on behalf of the relatives of the 11 people who died under the Trust Deed, bravely stood before the court to share the horrific and heartbreaking aftermath of the loss of their loved ones.

Robert Wade, father of 30-year-old Richard Wade, who died in May 2015 – two months after the investigation was over – spoke in court to read his victim’s personal testimony.

He told the court that he would be “forever lost to us” “just 12 hours” after his son was admitted to the Linden Center in Chelmsford.

Mr. Wade said how after the death of his beloved son he would wake up with “fear in the chest” and that every time he has to experience that death again, “a small part of my soul dies”.

Prior to Richard’s death, Mr. Wade said he had been ambitious and looked forward to advancing his career – but his son’s sudden death killed his ambition.

“Six months off work and I had a controlled return from work for six months. All I could do was sit at work all day and cry and force myself to return to work the next day to repeat and suffer and despair, “he said.

He added, “This was an isolating experience. Every day the language cannot fully express the depth of feelings. It breaks my heart to see my wife grapple with Richard’s loss and think of my remaining son.

“He has no more future”

If you’re looking for a way to keep up with the latest news from across Essex, the EssexLive newsletter is a great place to start.

The twice-daily update delivers the top news and features to your inbox every morning and evening.

We select the most important stories of the day to include in the newsletter, including crime, court news, long reads, traffic and travel, food and drink articles, and more.

Registering for the newsletter is easy. All you have to do is click here and enter your email address.

This is one of the many ways to read EssexLive’s important news.

Richard’s mother, Linda Wade, also spoke in court: “He no longer has a future, ours has changed forever.

“How did it happen? I think he should have been safe and in the care of professionals.

“I was in shock and disbelief for a long time and had to get out of bed every day and put one foot in front of the other.”

Lisa Morris, the mother of Ben Morris, who died at the Linden Center at the age of 20, read her testimony of the victim’s impact to the court and said she was finally informed of her son’s death that morning – after trying had to call him.

After being told to ring the doorbell between the center and the police station with no answer, she said she had a terrible feeling that he was dead.

“I actually said to my partner, Ben is dead, I can feel it,” she said.

“I remember him saying something like, ‘Don’t be so stupid, he’s in the hospital’. But I just knew.

“The officer said my son was found hanged in his bedroom at 9:00 pm the night before. It was like something shot me to the ground and I howled like an injured animal, ”she said.

Check out local issues where you live:

“I couldn’t think, I couldn’t breathe, it was like suffocating alive.”

She said, “How? Why how? How could that happen?

“I spoke to the station for half an hour before they found him lifeless. They told me they were watching him because he was desperate and wanted to be released and he wanted to fire himself.

“They told me they were waiting for a doctor to come out to discharge them – so how can someone lose their life while being watched?”

Ms. Morris added, “When Ben died, I had to learn how to live life again at the age of 38.”

“I now live exclusively for my other two children, if it weren’t for them, I don’t think I would be here anymore.”

The mother said that she was severely sleep deprived, fearful and grieving, and that her belief in “all authorities was shaken.”

“My only son, my little boy, my child, lies dead”

Melanie Leahy and her son Matthew

Melanie Leahy, mother of 20-year-old Matthew Leahy, who died at the Linden Center in November 2012, has been fighting for a legal public inquiry for eight years.

Her beloved son was found hanged in his hospital room seven days after being admitted.

She said, “There are no words to describe the devastation and feelings that struck me when I remembered the doctor’s call that Matthew was found hanged and it doesn’t look good.

“We also had to see my son lying open-eyed in a hospital van shortly after his death, but we couldn’t see him anymore. My only son, my little boy, my child, lying dead.

“My instinct as a mother was to take him in my arms, to bring him to safety and to give him my love.”

Ms. Leahy added: “Imagine your child is in the hospital, trusting professionals, listening when they tell you to stay away when your only child begs you to help them – to protect them , As a mother, suppress all instincts and continue to trust the professionals.

Ms. Leahy described how she was plagued by the “appalling lack of diligence” and the “litany of mistakes and cover-ups”.

She added how she thinks about the man her son would have become and the children he could have had, and how any celebration is marked by his absence – and the “family photo album that comes to an untimely and unnecessary end”.

Judge Cavanagh read a list of the eleven people who lost their lives to the court before saying, “Each of the statements about the impact of the victims was moving, often heartbreaking and dignified.

“They were delivered with great courage,” he said. “In each case, the personality and positive qualities of the loved one radiated, and the pain and agony suffered by the family left behind were clearly visible.

“There is no doubt that each of the deceased was deeply loved and valued by his or her family.

“They brought a lot of joy to those around them and should not be defined or remembered by the way they died.”