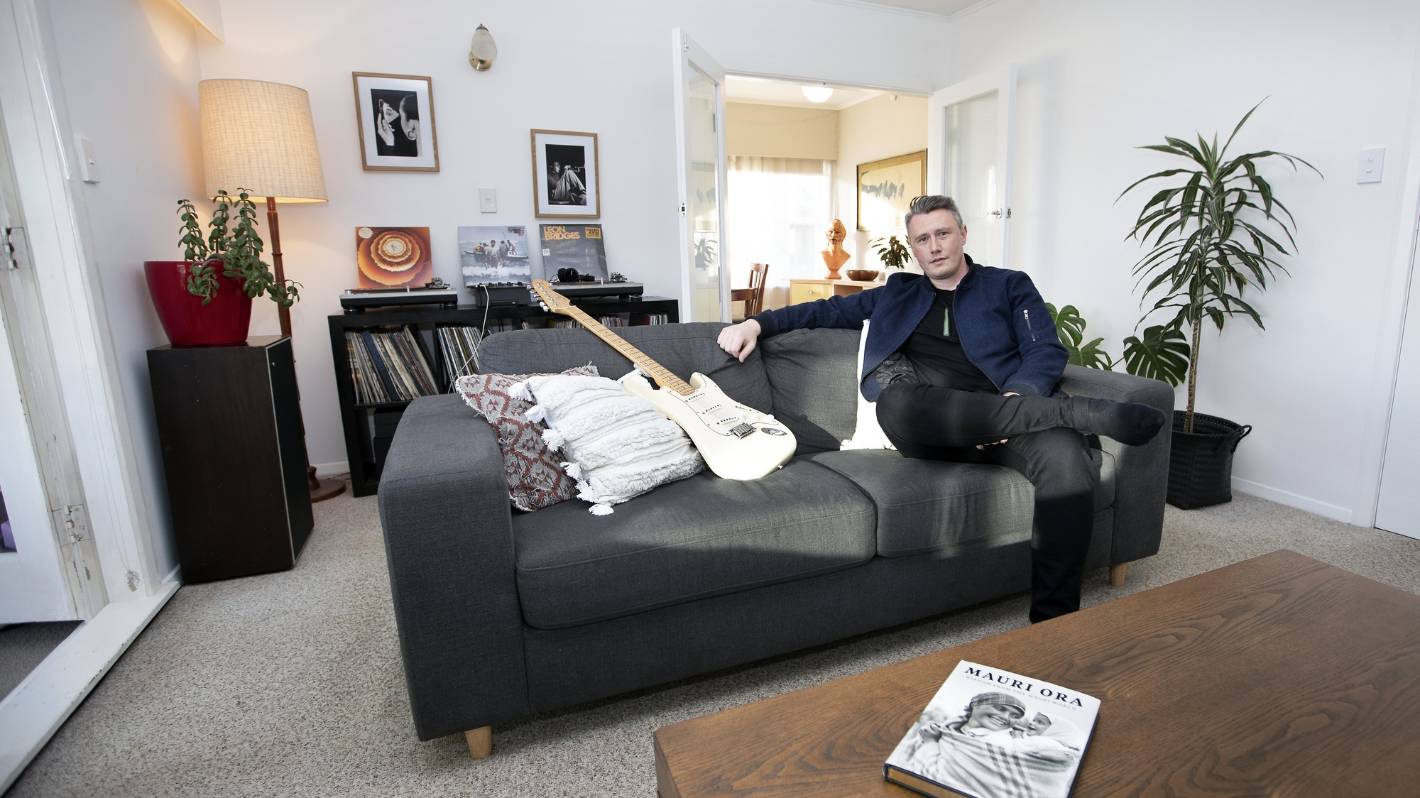 Wellington-based singer-songwriter Louis Baker and his partner Cushla Aston spent three years looking for an apartment before they managed to buy their beloved first home in Tītahi Bay, Wellington.

Wellington-based singer-songwriter Louis Baker of Neo-Soul recently bought his first house in Tītahi Bay with his partner Cushla Aston. You live three minutes from the beach.

Louis Baker: Nature is a big part of our life.

The house is a mid-century building made of sturdy wooden weatherboards. It was very well looked after by a lovable 96 year old named Linda, who was here before us and is still alive. We felt good energy entering the house, we could feel that it was very popular.

We had been looking for an apartment for about three and a half years and had really closed our hearts. It was definitely stressful, and there were moments when we thought we’d never get on the ladder. Persistence is the winner. We just kept going and supported each other.

Louis Baker’s prized guitars outside of his first mid-century home. He spent the last summer patching holes in the exterior.

We are so happy we got it.

CONTINUE READING:
* At home with Miter 10 CEO Andrea Scown
* How to avoid the Kmart effect in your home
* Like a Big Warm Hug: Why Fluffy Furniture Is In Fashion

My home studio is my little place of happiness. I always write and create, record, mix and produce. I love the lounge because of the water view. I sit back and chill and listen to records.

When we got in here we tore off the 60s wallpaper. I’ve gotten to do the give-stop. My partner’s brother filled all the walls with plaster and we did the paint. In the summer I repaired all the small cracks on the outside. I think I will be my father.

My music collection consists of all my heroes, my favorite music from soul, jazz and blues. My first record was a Jimi Hendrix that my father got me.

Whenever I travel I will definitely stop by somewhere and buy vinyl and that will remind me of where I’ve been. I think scientifically speaking, people hear between 20 Hz and 20 kHz most of the time, and there are frequencies that are put on vinyl that are not on CDs or tracks. You can actually hear the difference.

Good Thing by Leon Bridges is an album that I really love. Respect The Process is the new album by Team Dynamite, a rap collective from Tāmaki Makaurau. I was on a track called Dragon Fruit. On the left is Songs in the Key of Life by Stevie Wonder – a classic.

On the coffee table is Mauri Ora, a book a friend gave for the inauguration. It connects Whakataukī across cultures and generations.

I just released a record called Love Levitates and one of the tracks on it is Brighter Day, which I dedicated to my grandfather. He was Lieutenant Colonel Frederick Baker DSO, a New Zealand soldier who served in World War II and led the 28th Māori Battalion.

I never met him personally, but I read a letter he wrote to his cousin in 1941. It was about all the harrowing things he and his men went through in Crete and North Africa. He was shot in the mouth and had to learn to speak again. I was really inspired by his story.

It is important that we preserve our culture and keep our stories alive by talking about and sharing them.

Lieutenant Colonel Frederick Baker DSO – a New Zealand soldier who served in World War II and commanded the 28th (Māori) Battalion from July 13 to November 2, 1942. He later worked in the New Zealand civil service and headed the rehabilitation department, which supported the return from the war to civilian life through funding, training and housing.

Matariki is about celebrating new life, new energy and the new year. For me, it’s always about my birthday. We love to host friends and whānau. It is important that manaakitanga be given, that is what it is about.

Both Cushla and I have creators for parents.

Norm Aston (Ngāti Maniapoto; Ngāti Pikiao) is her father, he is no longer with us. He is a beautiful artist who has made a lot of sculptures. We have a lot of them in the house.

My mother and father are from the 1960s and have a deep love for reading, art, music and the culture that they instilled in me.

I’ve never been to Japan, but I find the custom and history very interesting.

I am a lover of Eastern philosophy and poetry. Cranes have a symbolism of order. We found the painting in the thrift store.

A sculpture by Norman Aston and a painting of Japanese Edo cranes.

Louis Baker loves books and poetry, especially on Eastern philosophy. Reading and poetry are the mainsprings of Baker’s lyrical content when he writes music.

My cream electric guitar is a US-made Fender Stratocaster, a 2004 reissue of a 54 model that I bought for $ 2,000 when I was about 18 years old. I saved all my money and paid off the rest over time. It was my pride and joy.

The other guitar is a Canada-made Larrivee L-03 that I won in a songwriting competition. Asking me which sound I like better is like asking which child you like best.

It’s a nice thing to be able to share music live. I like to do it anytime.

Aotearoa soul star Louis Baker is out for four shows this month to celebrate the release of his new EP Love Levitates. Tickets at www.louisbaker.co.nz