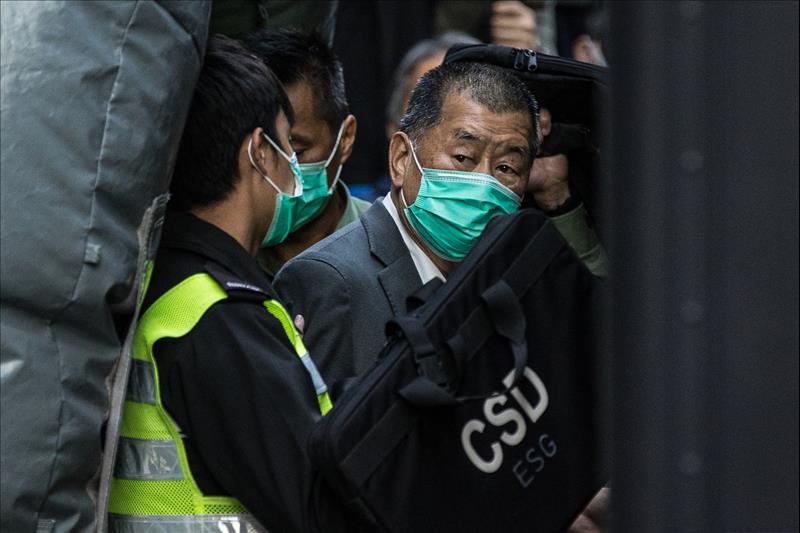 Jimmy Lai and I had recently spoken about a CNN newscast that showed his home in Hong Kong being monitored not by police but by unidentified “watchers” who followed him to his office at Apple Daily, the independent newspaper and broadcaster , of which he was the founder and managing director.

Although Hong Kong was then ruled under the “one country, two systems” deal, which was signed when the city was handed over from Great Britain to China in 1997, the Chinese Communist Party’s (CCP) “guards” were an early sign for how the city could lose its relative political openness and freedom of expression.

I asked Lai what was driving him down a path that could lead to increased conflict with CPC chief Xi Jinping, loss of his property, and very likely imprisonment and / or execution. He declared that all the money in the world is useless if it is at the expense of the truth.

“What use is my money if I can’t say what I think openly?” He asked.

He went on to explain that “the communists think they can buy and / or intimidate anyone, create their own reality, and write their own story. In fact, they are playing the role of God. They are some kind of religion or anti-religion.

“But,” said Lai, “the party and its members have no souls. In fact, they are dead men who walk because the truth is not in them. “

That discussion came back to my mind as I read about the collapse and shutdown of Apple Daily, Hong Kong’s last independent newspaper run by the law of freedom of expression.

It didn’t just collapse because of Lai’s arrest and imprisonment. In fact, the newspaper’s popularity skyrocketed after his imprisonment. Out of a daily run of about 100,000 copies, 500,000 copies were printed, and even that wasn’t enough to meet demand for Apple’s truth.

Of course, this demand represented a formidable, roaring censure against Beijing’s welshing on the original deal with Britain to maintain one country, two systems for 50 years, until 2047. It presented a huge demand for the right to hear the truth and to have a soul.

There was no way the CPC could allow this challenge. Apple’s cash and other assets have been seized and frozen by the party-controlled government, while several of its editors have been charged with various obscure crimes.

Jimmy Lai’s life is both an inspiration and a potential rebuke. As a 12-year-old boy in Guangzhou, he stowed away on a boat to Hong Kong. There he got a job in a textile factory in 1947 for a wage of HK $ 12 a month (approx. US $ 2). He only spoke Cantonese and had little education.

But he had energy, ambition and courage. He was fluent in English, read a lot and, through hard work, became a factory manager in 1975. Then he bought a bankrupt clothing factory with his year-end bonus and founded Giordano, his own textile empire, which ultimately employed 8,000 people in 2,400 shops in 30 countries and regions.

After the CCP’s 1989 massacre of students protesting for democracy in Tiananmen Square in Beijing, Lai became an ardent advocate of democracy and left the clothing store to start a publishing empire with Next magazine and Apple.

These publications flourished in Hong Kong and Taiwan, but were banned in mainland China after 1994 when Lai wrote in a newspaper column that Chinese Prime Minister Li Peng should “drop dead”.

Lai explained to me that reading Friedrich Hayek’s 1944 book The Road to Serfdom inspired him to fight for freedom. And he fought.

He was arrested in Hong Kong in 2014 for participating in the student umbrella movement calling for further democratization of the city government. He became the target of enemy attacks. Machetes and threatening messages were left in its driveway.

He was rammed by a car and his house was incinerated not just once but several times. Eventually, he was arrested and detained in December 2020, and he was even arrested again in prison on further charges.

Now, with the effective government seizure of Apple and his own incarceration, Jimmy Lai’s fate appears to be sealed. But he regards all of this as badges of honor and insists that “no one can say we did not fight” and that “prison life is the high point of my life. I am completely at peace. ”For Jimmy Lai, the soul is priceless.

This presents a key question and challenge for free world leaders and business people around the world. In contrast to Jimmy Lai’s Apple, the Apple of the iPhone and Mac is deleting applications from its app store in Hong Kong at the suggestion of Beijing, because demonstrators for democracy are using them to avoid being arrested by the Thought Police.

The heads of state and government of the major democracies of the Group of Seven are cautious about formulating their communiqué on relations with Beijing in order not to jeopardize German exports of Mercedes-Benz cars or French wine to China.

While Jeff Bezos plans his space excursion, his Amazon is spending a lot of money trying to influence the U.S. Congress not to enforce labeling that identifies the country of origin of products sold by Amazon (primarily in China).

Universities like Harvard, Stanford and Oxford often invited the Dalai Lama to speak at the opening ceremony in the past, but not so much as it became clear that Beijing could prevent Chinese students paying full tuition from entering institutions visit who invite the Dalai Lama.

What is and should the price of these souls be?

Disclaimer: MENAFN provides the information “as is” without any guarantee. We assume no responsibility or liability for the accuracy, content, images, videos, licenses, completeness, legality, or reliability of the information contained in this article. If you have any complaints or copyright issues related to this item, please contact the above provider.