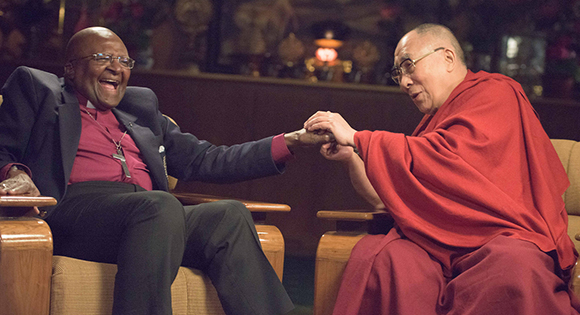 This inspiring and edifying documentary is directed by Oscar-winning director Louie Psihoyos and co-director Peggy Callahan. It was filmed during Archbishop Desmond Tutu’s 2015 visit to Dharamsala, India, on the 80th birthday of His Holiness the Dalai Lama. These conversations led to her New York Times bestseller, The Book of Joy: Lasting Happiness in a Changing World.

The film begins when the Dalai Lama meets Archbishop Tutu’s plane and they share a warm greeting. These two Nobel Peace Prize winners call themselves “mischievous brothers” and unlike many spiritual teachers who avoid laughter and play, these two model these joyful practices when they smile, giggle, hug, hold hands, laugh, and laugh wildly.

In an interview with Doug Abrams, they talk about how they view joy as the secret of happiness and an antidote to anger, hatred, selfishness, violence, revenge and other self-centered emotions that keep people apart. They discuss learning from their enemies, embodying humility, practicing silence, practicing meditation and prayers for health and healing, and the liberating nature of forgiveness. The Dalai Lama’s longtime translator, Thupten Jinpa, adds context and his own reflections on these issues. Tutu’s daughter, Mpho Tutu van Furth, does the same in view of her father’s ministry.

Several powerful scenes show these two friends and spiritual leaders walking through the community of Dharamsala. At the birthday party at the Tibetan Children’s School, they listen to the stories of children who have fled Tibet. In response to a girl who becomes sad while talking about leaving her parents, the Dalai Lama offers her courage and tutu of consolation.

Historical film footage and animations inform the viewer why the Dalai Lama left Tibet after the Chinese invasion and how Archbishop Tutu had to endure racist attacks under apartheid in South Africa. Both continued to risk their lives through the practice of nonviolence. For them, suffering became an opportunity to learn and find new ways of doing great service to the world. Taking care of others, they claim, is the best way to have a happy life. The archbishop says that suffering becomes compassionate. The Dalai Lama quotes a Tibetan saying that suffering brings joy.

From start to finish, this documentary simmers with laughter, humor and play. All of this leads to a fresh and subtle recast of joy and its predominant place in the spiritual life. We were reminded of these quotes about laughter:

“Of all the gifts that nature gives people, hard laughter must be at the top.”
– Norman Cousins ​​in The Heart’s Code by Paul Pearsall

“Humor is a prelude to faith, and laughter is the beginning of prayer.”
– Reinhold Niebuhr, American theologian

“Laughter frees the mind to endure even the most tragic
Circumstances.”
-Gerald Coffee in The Courage to Laugh from All Small