The pandemic and the death of the chief priest of a major Catholic church in New York City have forced this once thriving house of worship to close its doors. Father Andrew (Kevin Corrigan) has little to do and has decided to keep a diary of his reactions to the disaster that befell him.

Father James (Thomas Jay Ryan), a second priest within the Church, is more afraid than Father Andrew of contracting the virus. Just as he adheres to the rigid teachings of the Catholic Church, he strictly adheres to the hygiene and distance regulations of the city.

When Paul (Max Casella), Father Andrew’s eccentric college friend, stops by and is about to go to church, the two priests have to seriously think about opening up so people can pray there while they have the benches in between clean attends and nobody touches others.

With this simple structure in mind, writer and director Onur Tukel has done a remarkable job of exploring the major spiritual problems arising from the pandemic and how they affect us. Here are a few of them.

A survey conducted by the Pew Research Center in March 2020 showed that the pandemic had a significant impact by bringing more people to the practice of prayer. When the priests open the church, even limited to 10 minutes per visitor, people queue up to pray in the sanctuary.

Father James questions the sincerity of gratitude expressed in the nightly ritual of New Yorkers who go to their windows or balconies to clap and cheer on health workers. But when he asks Sarah (Natalie Carter), a Church member who is a nurse, how she’s feeling, she tells him that it lifts her spirits and inspires her. 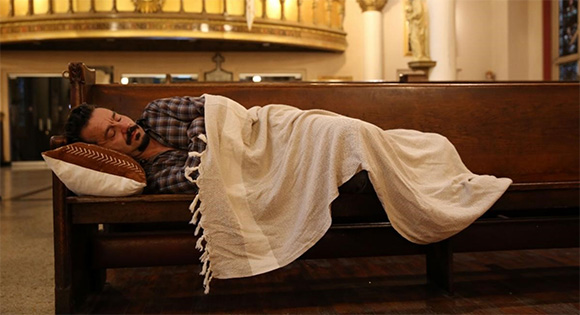 In times of great suffering, loss, and sorrow, we must open our hearts and minds to those who are different from us, even those who exhibit strange behaviors. First, Father James and Father Andrew try to discourage Jimmy (Edward Carnevale) when he is baptized; they are not convinced that this seeker is real. But they give him what he wants after making a great contribution to the Church. They are less open to a woman who claims to be able to project her soul out of her body. Other events give priests the opportunity to deepen and enrich their faith.

Director Unur Tukel honors three impressive performances by Kevin Corrigan, Thomas Jay Ryan and Max Casella as Paul. The sobering treatment of forgiveness in drama is very powerful. It is reminiscent of Harold Bloomfield’s definition of it:

“Every day you do not forgive, it is like ingesting tiny pieces of poison. This poison is slowly robbing us of our desired future. Whether we need forgiveness for ourselves or for others, it is imperative to give ourselves permission to participate in the sacred process. ”