I have never made a secret of the fact that I value the Vita very much. Not only did the system offer a range of games from genres that I personally love, not least RPG, but it was a home for new Sony IPs in particular. Some games like Gravity Rush and Tearaway eventually got featured on PlayStation 4, and many other games were cross-platform releases from the start, but others got stranded on the tiny handheld that could do that. Sony’s Vita edition was among the most creative games the company has released last generation, and for many Japan Studio fans, it was their last real chance to enjoy their edition. There were some real gems in the Vita catalog and it would be a shame if some of them were lost forever.

Soul Sacrifice was one of those games, and it deserves a lot better.

One of the most defining aspects of the last generation of handhelds was the leap that Capcom made with Monster Hunter from the PSP to the 3DS. Monster Hunter was one of the reasons the PSP was able to compete so closely with the DS in Japan, and so with the lack of a major title on the Vita – many companies tried to fill the void, not least Sony itself. Games like Toukiden, God Eater and Ragnarok Odyssey all tried to closely mimic Monster Hunter’s gameplay loop. You could even say to their own detriment.

When Sony threw its own hat in the ring, the titles they put on the table were more than just Monster Hunter with a different skin and some dressings. Although I never really studied Freedom Wars, I was always struck by neon science fiction and the dystopian aesthetic. Soul sacrifice on the other hand? That was all my jam. With what I could only describe as somber aesthetic, the monsters players faced were all poor souls tainted by their vices in caricatures of iconic creatures of European folklore and beyond. When Soul Sacrifice Delta hit the market, the comparisons with the Brothers Grimm became even more accurate, as many of the new monsters were taken straight from their fairy tale catalog. 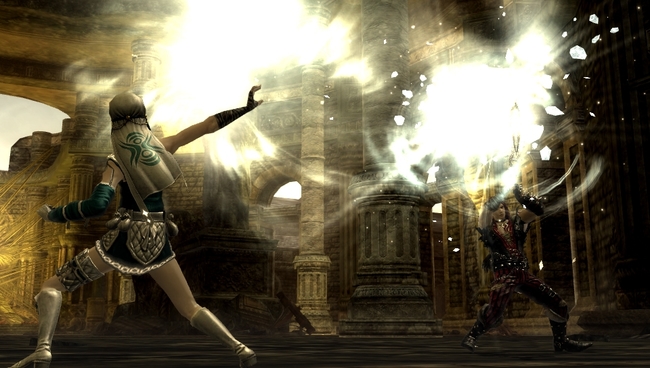 There is nothing like it; the closest comparison I could make would be that the aesthetic reminds me of a mix of Alice and Dark Souls, although even that falls a little short. The game’s different battlefields each had their own identity – each of them impressed in a unique way. While some of them were more grandiose than others, the game kept a cohesive design language in which all of these areas felt like part of the same world, even if viewed individually they all had their own design language.

That’s not to say that the game didn’t come with a fair share of compromise. With a few exceptions, the game had no cutscenes. The way the narrative unfolds is handled by reading literal pages of the living book Libroma. Discovering the memories of wizards long lost, the relationships he had and fostered over the centuries with the game’s main antagonist, Magusar, and other wizards – it was all very impressive. Much like the Thousand Years of Dreams from Lost Odyssey, these stories are more than just words on a page. They are accompanied by changing texts and colors, illustrations and paired with the haunting soundtrack in the service of the entire narrative. The felled beasts are even offered their own short stories describing the events that lead to their being tempted by the Pale Chalice and turning their desires into a curse. 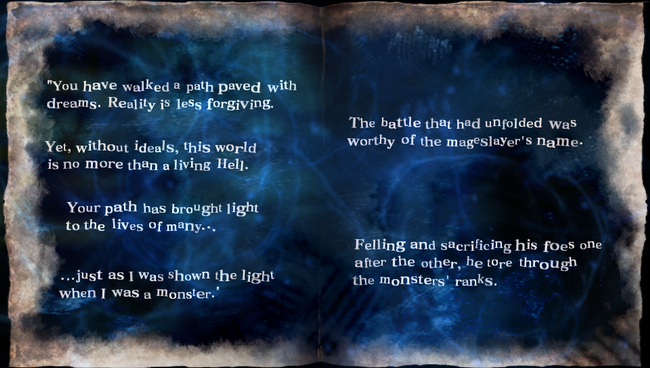 Soul Sacrifice isn’t a perfect game – far from it. There’s a reason even fans don’t get too deep into the gameplay. It’s a bit of a silly proposition – instead of a bespoke moveset, you equip “offerings” that you use as spells. Some are support spells, some are for attack – but all of them are incredibly easy to use. Delta made it better by allowing you to change the attributes of an offering based on what else you already have equipped. If you had an advanced dash buff enabled, you could chain melee offerings from a dash into a new, unique move. Some offerings were now able to interact with the environment in a variety of ways, and of course the enhanced version came with a number of new offerings on top of everything else.

What makes Soul Sacrifice’s apparent demise even more heartbreaking are these very signs that the developers were learning from their mistakes and improving an already great formula. Delta’s own additional narrative has more than proven that the excellent world creation and narration by director and screenwriter Teruhiro Shimogawa was more than a coincidence. Given his previous work at Capcom at Ace Attorney Investigations 2, this shouldn’t really come as a surprise. 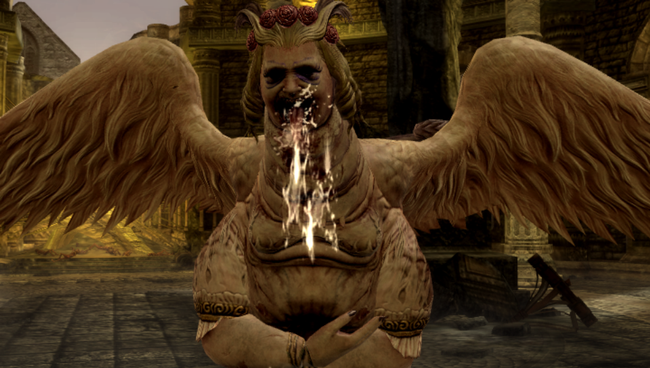 It’s rare that a development team can successfully create such an iconic new IP the first time, even less when they can improve their work so dramatically a year later. It pains me that Sony didn’t fund the team to work on a sequel for PS4, but it’s not exactly surprising. Even if it had initially received the green light internally, it is clear that Sony would have hesitated to develop the franchise further after securing Monster Hunter: World for a PS4 release. Even if Soul Sacrifice was far more than just another Monster Hunter imitation in practice, it should always fill this gap on paper.

Comcept hasn’t developed anything noteworthy since Soul Sacrifice Delta was released in 2014, and Shimogawa himself left the company in 2020. The ultimate fate of Japan Studio is also known. As if by an ironic twist of fate, Marvelous’ own developers who helped work on the project have continued to work on Monster Hunter Stories 1 and 2 over the years, with at least part of the team working on God Eater 3 for Bandai Namco works in 2018. For better or worse, the series’s death was likely decided not long after Delta’s release, or even possibly before; we will probably never know for sure.

There’s not much room for hope of a sequel or even port across the board. It’s a shame, because a series like Soul Sacrifice shouldn’t have died with its vita.