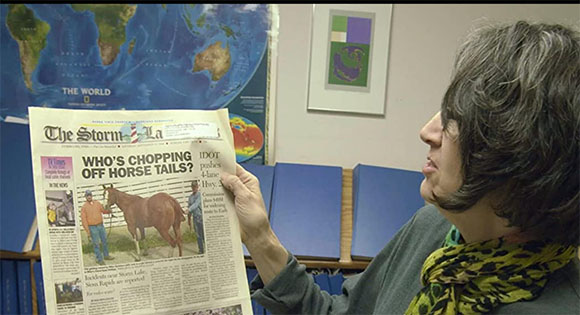 The Storm Lake Times has appeared twice weekly since 1990 in the small Iowa community of 11,000 people. This family newspaper is run by John Cullen, the editor and founder; Art Cullen, the editor, a liberal advocate for fact-based journalism who has won a Pulitzer Prize; Art’s wife Delores, who loves taking photos and telling stories of special interest; and her son Tom, a reporter.

While plane passengers may think that little is happening in farmland derisively dubbed “flyover land”, this newspaper proves they are wrong. Storm Lake residents enjoy local events like the July 4th parade, cheer a local Latino in a singing contest, and keep up to date on births, weddings, and deaths. The newspaper acts as a watchdog keeping track of what’s going on in the local government and by covering the full range of news they weld the community together.

The Storm Lakes Times is covering February 3, 2020 in Iowa Caucus, where Democratic candidates including Senator Elizabeth Warren, Julian Castro, Senator Amy Klobuchar, Andrew Yang and Pete Buttigieg discuss their solutions to the problems that plague farmers thanks to an economic downturn. The only people making money in the area are the executives at the Tyson Pig Packing Factory.

But the pork industry and the rest of the city will soon be hit hard by COVID-19. The Cullens watch the newspaper’s revenue run dry as all of their ads come from high street mom-and-pop stores. Looking at the media market, Art laments the fact that “people want their messages over breakfast for free on Facebook”. It’s no wonder that one in four newspapers in the United States has shut down in the past 15 years.

Storm Lake is one of the best documentaries of the year with its all-round embrace of community, politics and ethics during these troubled times. Resius and Levinson give us a lot to think about and talk about in this greeting to local journalism.

“The reporter is the cornerstone of democracy.”
– James Madison