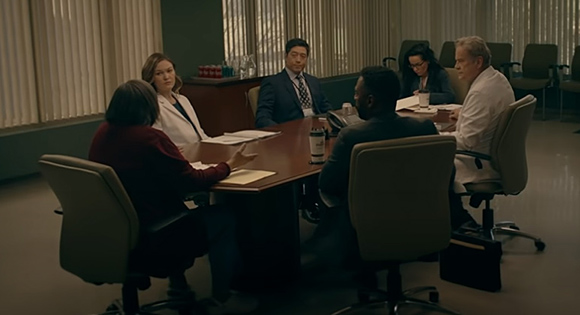 Ethics, or moral philosophy, deals with what is right and wrong. It influences individual decisions which then usually affect the larger community. It is not easy to legislate, even though governments have tried. It is not something that the religions have exclusive, although some have claimed it is. All professions have their own ethical statements, and some of the most difficult to implement are in the medical field.

The five main characters in this gripping medical drama are members of a city hospital organ transplant committee who regularly decide who should and should not be given an organ. To do their job well, they need to consider the ethical implications of their decisions.

The members of the committee are:

Dr. Andre Boxer (Kelsey Grammar), a highly skilled surgeon who is hiding a secret that will have ramifications for other committee members.

Dr. Jordan Taylor (Julia Stiles), a talented young doctor who is having an affair with boxers. Both are unmarried and have decided to keep their intimate relationship a secret. Their affair is made more difficult by the fact that he has announced his retirement and wants to get into private research.

Boxer is surprised when Taylor is elected to the transplant committee. He is a strict rationalist whose scientific perspective differs from Taylor, a compassionate doctor who takes ethics very seriously.

Dr. Valerie Gilroy (Janeane Garofalo) works in administration and spends her considerable time and energy worrying about the hospital’s decline in finances and industry valuation.

Sister Wilks (Patricia R. Floyd) seems to know most about the patients on the heart transplant list, including their personal histories and possible futures.

Father Dunbar (Coleman Domingo) is a priestly attorney attending committee meetings with a message from the hospital’s board of directors.

When a heart becomes available for the transplant program, that group will have an hour to decide which of three candidates to receive it. They need to weigh what they know about each patient, how they feel about each of them, their concerns about whether they are the best choice given their prospects for survival, and more. Ultimately, it comes down to the decision between right and wrong, not only for the patient but also for the hospital. 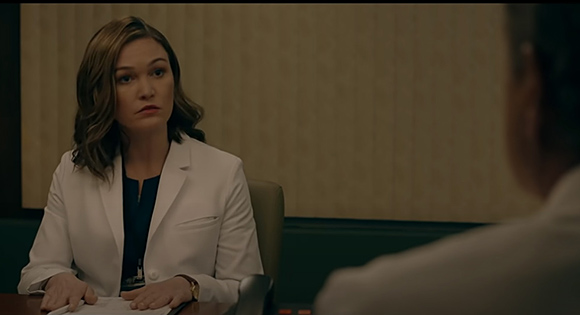 Writer and director Austin Stark does a compelling job of presenting this committee’s ethical dilemmas. Obviously, it’s not an easy choice for them. In scenes that take place outside of their meetings, we realize what is at stake in the larger context of transplant science. Flash forwards to a research laboratory ten years later highlight these problems.

Stark’s emotionally educated script based on Mark St. Germain’s play contains a lot of spiritual explosive in the treatment of medical ethics. The God Committee is recommended for anyone seeking serious spiritual programs.