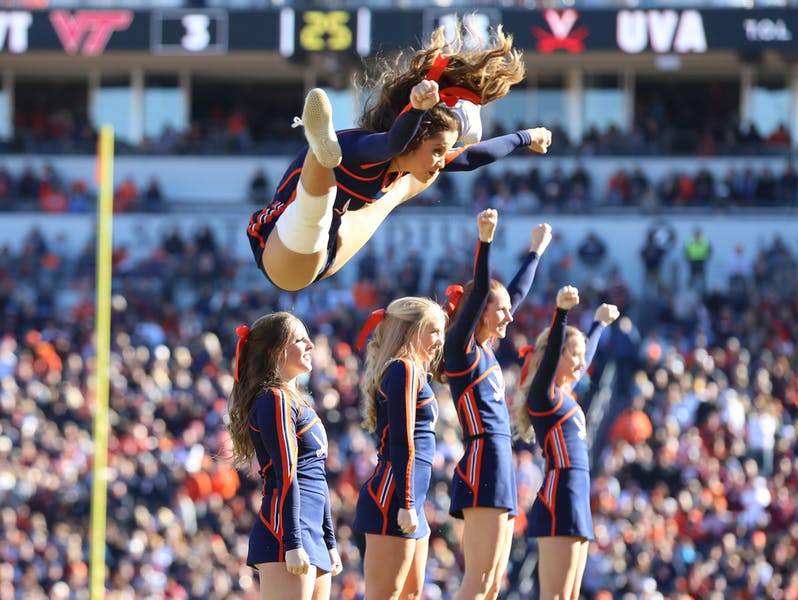 Fans aren’t the only ones missing from sporting events this year. Virginia Spirit Teams – including Cavman, the Dance Team, All-Girl Cheer, and Co-ed Cheer – are currently unable to perform on the field at games under new ACC mandates. While the team members were prepared for an unconventional fall season, they were unaware that this year’s changes would include a training ban. Since being notified on October 13 that Virginia’s training staff would not be able to handle the return of the ghost teams, members have created an open petition asking Virginia Athletics to implement the teams’ pre-approved training plans.

The petition calls on Athletics Director Carla Williams, Executive Associate Athletics Director Brittany Whiteside, External Affairs Director Todd Goodale, President Jim Ryan, and the university community to consider how spirit teams from other ACC schools and high schools in Virginia are resuming their activities have the impact of the teams on the community and the available solution.

Upon returning to school, Spirit Teams coach Kelley Haney worked with Goodale to create a training plan designed to reduce stress for the training staff, which was approved by the athletics department. The plan included a three-phase system starting with “materials, basic tumbling, exercise and conditioning” that would result in stunts and basic pyramids over a 12 week period while adhering to COVID-19 guidelines. The athletics department ultimately failed to enforce the plan and decided to revoke the ghost teams’ ability to practice, which Goodale, Haney and Whiteside communicated in the virtual meeting on October 13th.

When Haney shared the link for the Zoom call with the Spirit team members, no one had been warned of the decision he was about to hear. In fact, the meeting had been scheduled to coincide with the teams’ previous bi-weekly meetings during their typical Tuesday and Thursday training times, suggesting an aura of normalcy.

“[The pre-approved plan started] The multi-step process that every team went through here at university to get back on board, ”said Lexi Magenheim, the sophomore cheerleader. “We thought we were following the same path as any other team at U.Va.”

But after adapting to virtual tryouts, 12-member restrictions, prohibited participation in games, and prohibited training, it was clear that Virginia Spirit teams were not on the same “path” as other sports. Second year co-edge cheerleader Emma Imbarlina acknowledged this imbalance by explaining the complexity of the petition.

“We want to keep our skills when we have the opportunity to get out, but at the same time [the petition] is also committed to ensuring that we get better treatment because none of this is a priority, ”said Imbarlina.

According to Magenheim, ghost teams from all other ACC schools practice – at least – but most schools are making extra efforts to involve ghost teams while continuing to adhere to the ACC mandate that bans cheerleaders and dancers from performing on the field. For example, Virginia Tech Cheer holds masked practices while using platforms like Instagram to promote game day spirit. Additionally, ghost teams from Notre Dame, Clemson, Wake Forest, Virginia Tech, North Carolina State, Pittsburgh, Louisville, and North Carolina have recently reentered their respective venues for games and competitions, cheering in the bleachers and on the hills.

Virginia, on the other hand, has not allowed its ghost teams to do the same, or even allowed ghost team practices. When it comes to the idea of ​​virtual practices, the ultimate goal of the Spirit Teams is to be personal, as has been possible for Spirit Teams at other ACC universities.

At the high school level, ghost teams in Virginia are starting off-season fitness training and are due to resume training on Dec. 14, according to Haney. Sophomore cheerleader Haven Higgins says Virginia Spirit teams are “open to compromise” and, at the end of the day, simply want to get involved in any way they can.

Senior Co-Ed cheerleader William Price is familiar with the challenges of being a member of a Virginia Spirit team and working with Virginia Athletics. After Price realized throughout his time with the program that he believed there was a constant lack of fair and equitable treatment, Price became passionate about standing up for the Spirit teams.

“I feel like if change is going to happen, it has to be through people like me and the other fourth graders,” Price said. “We only ask to be treated fairly and equally, like everyone else at U.Va. and all about the ACC. “

According to Price, the main problems with the program are miscommunication and legitimation. Price stated that this team would not be able to function “as a unit” if another sport – possibly – had not been practiced for a year and a half.

As his Virginia Cheer career nears the end of his career, Price realizes the importance of hearing the voices of the ghost teams. If Price can make any notable change in the program from his work on the petition, his time with the program will be “totally worth it”.

Senior Dance Co-Captains Kiara Cross and Nadeen Rollins are also involved in ensuring that their voices are heard, especially since this is their last season with the team. Cross – a dancer of 19 – was looking forward to one last season this season “surrounded by a group of incredibly talented and motivated women who continue to motivate me to be a better dancer and person every day”. Cross also pondered what it would mean to end her final season without the opportunity to perform again.

“It’s hard to know that realistically I won’t ever perform at Scott Stadium or JPJ again, but having the opportunity to continue creating dances with my teammates would be the best of this difficult situation,” said Cross.

While the petition arose as a result of pandemic-related fighting the ghost teams are facing, Rollins stressed that the petition is not limited to current members of the teams.

“It is for the future generations of young dancers and cheerleaders who deserve to be treated fairly by a university for which they give so much,” Rollins said. “It’s supposed to attract attention [the spirit program’s] Worthlessness in the eyes of our administration. “

The aforementioned October 13 meeting sparked and united the collective desire of the Virginia Spirit Teams for change.

“We were on the phone for an hour and a half and asked, ‘What needs to be done? [practice] possible in spring? What can we do? Why is that?’ and her answer was simply that ‘the classroom couldn’t accommodate us,’ ”said Magenheim.

The Virginia Spirit Teams work from the same training rooms in the McCue Center as the college athletes. While the petition was being written to Williams and Whiteside – two administrators of Virginia Athletics – it was not officially sent to the athletics department as the people behind it are waiting for it to gain momentum. However, Virginia Athletics stated that a return to training would depend on “the athletics department’s ability to provide appropriate levels of care to cadre members.”

“The sports medicine department is understaffed this fall and is unable to effectively handle the surge in the number of students they mentored right now,” Jim Daves, assistant athletics director for media affairs, said in an email statement to The. Cavalier daily. “As soon as the sports medicine staff can provide the Spirit Squad members with adequate care so that they can safely return to the practice, we will begin implementing a return plan.

The petition has a very diverse and wide range, which can be easily recognized by the fact that the signatories are asked to associate themselves with a school and sport, if necessary. The 1,000+ signatories include university and college alumni, Virginia sports fans, friends and family. Several student-athletes – both from Virginia and other programs – have also signed in in solidarity with the Spirit teams.

“We were really surprised at how much support we received from fellow students – athletes, students, alumni and fans -” said Cross and Rollins. “People seem just as outraged as we do at our inability to practice.”

“The signatures mean that our efforts to foster a sense of community and togetherness have not gone unnoticed,” said Imbarlina.

As an institution created to foster community and connection, the Virginia Spirit Teams are especially grateful for the support they are ordinarily able to give to others. Members of ghost teams such as Higgins, Imbarlina, Magenheim, Price, Cross and Rollins are humbled by the positive response to the petition and are extremely grateful to those who stand behind and next to them.

“There is no more necessary time for the community than now, and we believe we can make a strong contribution and re-establish these connections during and after the pandemic,” Magenheim said.